Interested in the DEMAND FOR MK1 MINI SHELLS EXCEEDING ALL EXPECTATIONS?

That there was a pent-up demand for replacement MK1 Mini bodies was not in doubt, but British Motor Heritage (BMH) has nevertheless been stunned at the scale of orders since first displaying its prototype shell at the 2016 NEC Classic Motor Show.
Dramatically rising values are at the heart of the demand
Commented BMH’s Managing Director John Yea: “A few years back, though values of good Mini-Coopers were climbing steadily, the limited worth of their 850 cousins made comprehensive restorations hard to justify. The picture is now very different, and enthusiasts are busy rejuvenating all versions of Issisgonis’ immortal baby at an ever-increasing rate. As a result we are constantly having to raise our production targets, and that’s without taking into account the shells we are creating for David Brown Automotive’s impressive Mini Remastered programme.
“At just £9,950 inc. VAT, the cost of an all-new bodyshell crafted on original British Leyland tooling is proving to be a popular solution for more and more people restoring these coveted cars – some of which are, of course, fast approaching 60 years of age.”
Dedicated motorsport Mini shells could be on the cards for the future
BMH has been successfully running a Heritage-shelled MGB in historic racing for 12 years – arguably the ultimate test for what is one of the company’s key products. For this year it, and the team’s Farina A40, are being joined by an FIA specification MK1 Mini-Cooper S. In common with the MGB, it has been constructed around a Heritage replacement shell. Another notable feature of this pocket rocket is its roll cage – a superbly crafted item courtesy of Endaf Owen of Owen Developments.
Commented Yea: “We are very much looking forward to running the Mini in the heat of competition and, depending on the success of the venture, may build a limited number of equivalent competition specification shells for general sale sometime in the future.”
MK1 prototype shell dedicated to the revival of its progenitor
Another MK1 Mini under construction at BMH’s Oxfordshire headquarters is the rebuild of ‘OYO 747F’, the long-suffering 1967 Mini-Cooper S that was butchered to provide the master references for the aforementioned prototype MK1 replacement bodyshell. It is therefore fitting that the very same shell is the one now being employed for the original car’s resurrection – a task that’s been entrusted to renowned classic Mini gurus Somerford Mini. 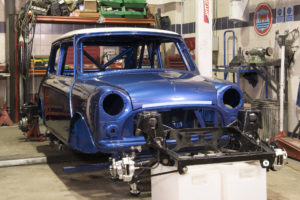